A couple of years ago we had a very successful product - a game hosting management panel. Over the years our client database grew and we introduced support for new games and new features.

That was our first product, and it became quite popular. At one point it was used by the majority of game hosting providers in Poland.

But then, here’s what happened: as our client database quickly grew and we extended the application’s functionality, we consciously started taking shortcuts. Sometimes because of time constraints, other times we just thought it was the smart thing to do.

With time it got harder and harder to fix the bugs and introduce new features. We had been adding fuel to the fire without noticing it. And then, one day, we just realized the product was not profitable anymore due to its technical debt. The expenses of maintaining the product outgrew the profits it had been bringing in.

(I hope you don't mind some self-mockery.)

The wheels fell off our success and we had to make the tough decision of ending our beloved product’s life. Just imagine, having the majority of a national market as your client, and not being able to earn any more money.

This situation had taught me something - skimping on quality always costs an arm and a leg in the long run. In my new projects, I now realize there is no place for such shortcuts. The phrase ‘technical debt’ is still something that gives me chills.

WAIT A SEC. WHAT DEBT ARE WE TALKING ABOUT?

Technical debt is not a physical thing, it’s a metaphor developed by Ward Cunningham that helps you think about the problem behind it.

Technical debt means that some parts of your system were made the “easy” way without taking care of the quality of the code written. Keep on cutting corners and your technical debt will likely grow. Like financial debt, it incurs interest payments - you don’t just pay back what you owe, but the more time you take, the bigger interest payment will be. The only difference is that no one comes out profitable from this situation - except maybe for your competition.

WHERE DOES THE TECHNICAL DEBT COME FROM?

At other times, there are junior developers who are not exactly aware of what they are doing or they lack certain skills. That may also lead to a technical debt or even a total mess- which is even worse than technical debt, but that’s another story...

A situation in which features consciously need to be implemented in a fast and cheap way is also common in the industry when the first-to-market strategy is used. Although it perfectly fits current business needs, one should remember, the faster the loan is paid back, the less it costs you in the future. The sad truth is, too few actually pay it off quickly, procrastinating, until it is too late.

IS THERE TECHNICAL DEBT IN MY PRODUCT?

Answer these questions to find out:

If you answered YES to any of the above questions, then you most probably have too much technical debt in your project. Keep in mind that these are only examples.

Regardless of whether you are aware of the debt or not, you can be sure that if you own any kind of software you also own its technical debt. It is very often the elephant in the room, no one wants to talk about it.

HOW MUCH DEBT DO I HAVE?

Here is the bad news - technical debt is rather unmeasurable. There are some ways that can help estimate the amount of debt, but they are only poor estimates that do not have any connection to real world. Such estimates can only help to compare the results between different versions of your system. There are tools that help to estimate the amount, but that’s a topic for another article. 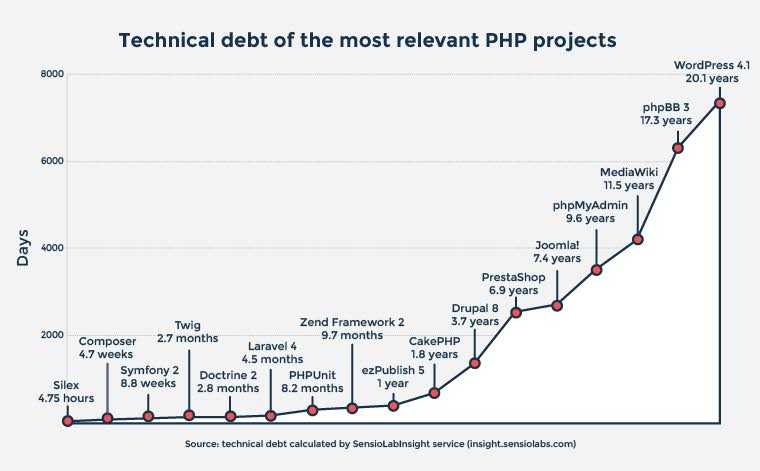 DOES TECHNICAL DEBT INFLUENCE MY BUSINESS?

Yes it does, like any other debt. Not only you have some code that needs to be refactored (and you need to pay developers for it), but what’s more important- the more technical debt you have the longer it takes to introduce new features. In other words, technical debt slows your ability to deliver future features. In some situations it is so big it is not possible to introduce new features in a reasonable time and within a reasonable budget! In some cases, the whole development can get stuck and no new features are added.

Just imagine being stuck while your competitors are gaining advantage with every day. Painful, right? Fortunately, not all technical debt is bad for your business, and thus not all of it has to be paid back. You just need to keep it on a low level.

Some very terrifying examples of a disastrous influence of technical debt might be Friendster and Knight Capital. Friendster might be the first social network ever, but it lost its chance to win the market due to technical debt issues - page loading times were too slow, and the service was not able to scale quickly enough. At Knight Capital they lost $440 million in 45 minutes just because they had old code still installed on their servers, and the code was not enough tested. You can find a lot of articles about this case as it caused major disruption in the prices of 148 companies listed at the New York Stock Exchange.

WHAT SHOULD I DO?

As I mentioned before, it’s hard to say how much debt you have and you should probably just ask your developers about it. Hopefully, they will not beat around the bush and will be very direct with you. Maybe they are already?

I have experienced the devastating influence of technical debt in my own experiences and I have seen companies struggling with it and seeking for help. Unfortunately, it’s such a common problem that if I would write down all stories about technical debt - it would be rather a book than a blog article.

If you are interested in this topic subscribe to be the first one to read the next part.

Want to get rid of your technical debt?